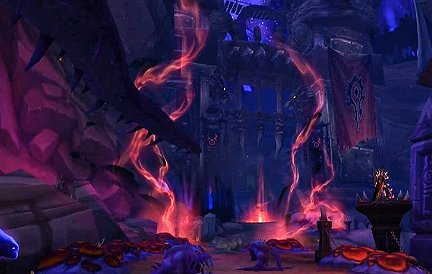 The new expansion to World of Warcraft Battle for Azeroth and Patch 8.3 is called Visions of N'Zoth. In this expansion, there are many new and reworked things. Most of the patch relates to N'Zoth itself, because we finally get to see one of the old gods. N'Zoth belongs to the ancient gods and he lurks in the depths of the ocean. He controls the Emerald Dream and there he is responsible for the nightmares. We've heard of him in some quests, even Shade of Eranikus mentioned that he serves an ancient god. With our products you'll also find the Boost for N'Zoth, which means that we'll do it for you..

In the new expansion there's of course a new raid and it's called Ny'alotha, the awakening city. In our products we also offer you the Raid Boost for the raid. In this raid you can expect 12 bosses, with N'Zoth as the final boss. The bosses of the raid are: Furorion the Black Emperor, Ma'ut, The Prophet Skitra, Dark Inquisitor Xanesh, The Hivemind, Shad'har the Insatiable, Drest'agath, Vexiona, Ra-den the Despoiled, Il'gynoth the Corruption Reborn, Carapace of N'Zoth, N'Zoth the Corruptor. In our shop we offer you the boosts for this raid in three different difficulty levels. It is available in Normal, Heroic and Mythic and we also offer the Ny'alotha Full Gear Set. The Full Gear Set is available once at levels 445, 460 and 475.

What are mechagnomas? It is a modification of normal gnomes. They live in Mechagon and fight against the king Mechagon. Over the years, the Mechagnomes have exchanged some body parts for mechanical devices. They have also improved their eyes through cybernetics. The mechagnomes can only be played by the following races: Hunter, Mage, Monk, Priest, Rogue, Warlock, Warrior.

What are the Vulpera? The fox-like humanoids found in Vol'dun are for the Horde only. To win them for you, you must accompany them and defend them against the Sethark. The Sethark is the most wanted allied race in the player community.

After their war, they will join the Vulpera of the Horde to assist them in future conflicts. The available classes for this race are: Hunter, Mage, Monk, Priest, Rogue, Shaman, Warlock and Warrior.

In our shop we also offer you the Honeyback Harvester's Harness. This came with patch 8.2.5 and it is the long desired Bee Mount. However, the mount is only available to the Alliance and no Horde player can sit on the mount or anything else. With our mount boost we will unlock the mount for you.

Other new features in patch 8.3 are that there will be new levels for the Heart of Azeroth. There will be passive bonuses and a new essence slot as well. There will also be new traditional armor for Goblins and Worgen. We have a lot to offer and every WoW Boost will be of use to you. We at Melk Trupp want to give you the best boosting experience you've ever had.